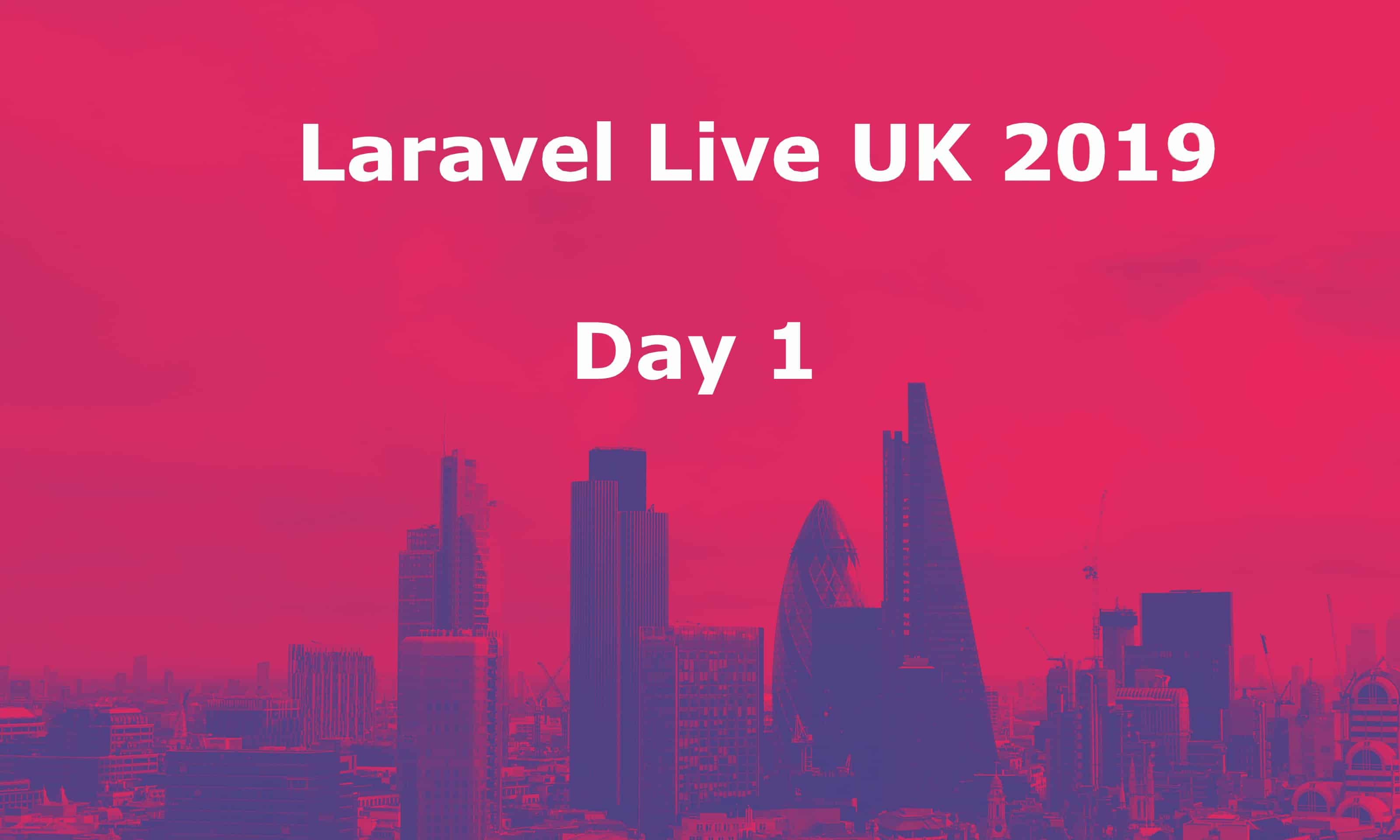 This week I attended the Laravel UK Conference in London. I've tried to summarise each speakers' talk into a bitsize snippet. Here's Day 1!

After some coffee, excessive amount of morning pastries, and a catch up with some of the guys from the LaravelUK Slack, the first talk began.

From the outset, it was clear that Nuno was very knowledgeable about PHP, and how to convey concepts to a wide audience. He managed to talk about inheritence, composition, abstact classes, and more, in a way that was understandable to both the lesser experienced listeners, and the advanced users.

His talk comprised of a few examples on how to write code that not only prevents bugs from future usage, but give useful feeback when something is used incorrectly.

Highlight of talk: "Just because Nuno needs to eat, does not mean we should eat Nuno. He is not food.

Wow this guy is energetic! It's kind of infectious. Engaging conetnt with some great lessons about the underlying "magic" of Laravel.

Christoph removes/explains a lot of the unnecessary assumptions made about the Laravel Core framework and how it works. In this talk he specifically spoke about 3 parts of the ecosystem; Request Life Cycle, Facades, and Eloquent

Highlight of talk: see below 😂

Lorna brought a great personality and feel to her talk about webhooks. She gave a full example of how to build, develop, test, and handle a 3rd party application webhook into Laravel - from the ground up.

She used a screen recording for the working example of the integration and showed of the brilliant tool of ngrok to share how we share local environments over the public web for development; a great tool for anyone to pick up!

Her vast experience within the Nexmo service shined as she gave detailed yet brief explanations of the integrations that everyone both enjoyed and understood fully.

She was open and honest about any issues / headaches she had about the exmaple code she was demo-ing, which gave the audience a sense of confidence in her and the content.

Highlight: Take your webhook process, and shove it in a job -the 3rd party doesn't care what you do with the data, just tell us if it's good or bad. Offload these processes if possible.

@nealio82 - Getting yourself out of trouble with PHP Anti-Patterns

My personal favourite speaker of the day. Neal got across the daily "challenges" and headaches that developers both face, and often contribute to. Anti-patterns.

His brash terminology (which was honestly welcomed given the context and topic) was endearing and definitely resonated with the Laravel UK attendance. Often he touched "too close for comfort" when talking about the shortcuts taken in development, and how spaghetti code and lava flow are a major problem in our industry.

He did mention that he removed some slides and concepts from his talk in fear of running over time - which was considerate of him, however I'd love to know what I was missing out on! Very much looking forward to his talk tomorrow.

Highlight: We're gonna take this code, and improve it. It's not going to be perfect, just less s***. That's not bad, it's better than before!

Liam spoke very honestly and genuinely about his experience as a CTO of a large worldwide gaming company. Having experienced times of having in excess of 1 million requests an hour, he knows about scale, and it showed in this talk.

He spoke about, and explained, the concepts behind both vertical, and horizontal scaling. As well as the challenges that each brought to the table. His answers the the community questions were brilliant, and he was sincerere when he simply couldn't answer but opened up to discussions after the talk had finished in a social capacity.

He spoke about database scaling and gave some great analogies to the ideas of sharding as well as replication and their respective uages / complications.

Highlight: Separate your concerns as early as possible. Then if your {X} has issues, you can just "make it better" without impacting the rest of your application.

The big man himself, at a little old Laravel UK meetup! Great organisation and procurement by Jonty who organised the event here. Incredible to manage to get Taylor in for a chat, and to do it so openly and in a "chat show" style was brilliant.

Here Jonty brought back some memories of Code Igniter 1 and when he was starting to make motions in the PHP ecosystem. Specifically building "cinjector", a dependency injection package for Code Igniter. This would be the start of Laravel as we know it today.

Some of the code found in today's core, is still from those days! I'm not too sure how Taylor felt about his profile picture from the forums back in 2011 being shared though, but hey, it was fun and informative.

Taylor spent half his allocated time discussing Laravel's origins and future with Jonty, however did not disclose any information about Vapor (much to the disappoinment of the audience)

Taylor did share some "insider" information about Laravel, which unfortunately he did ask us not to share, so for now - I'm going to honor that.

Taylor then spent the rest of his time talking with the audience and accepting floor questions. There was a lot of praise about him and how he's managed to turn people's careers' and/or lives around with Laravel. He also spoke briefly about the future of Laravel and how he sees it evolve with the internet as things move along.

A great speaker, and I hope he thoroughly enjoyed his time at Laravel UK - hope to see him again next year!

As I type this, from my hotel room not 10 minutes away from the venue, I'm eagerly waiting for the follow up from a great day. If this is what Day 2 has to offer, then I will have learned a lot. Both about the Laravel Ecosystem, it's people, but more importantly the incredible community it's created. Everyone I've met has had a great story and conversation to be had.